Southeast of Sedgefield Plantation’s manor house is a memorial heralding an extraordinary gun dog Hall of Fame. The roll of honor is a celebration of immortals: Paladin, Rapid Transit, Ariel, Luminary, Timbuctoo, Superlette ….dogs that won the National Championship, the National Free-For-All, the National Derby.

These champions and others of equal stature were trained and handled by Clyde Morton who won eleven National titles with seven dogs.

At another cemetery a mile away lies Wrapup, Spats, and Allure. Together they won two Nationals, one National Derby and seven Free-For-Alls. These wins were posted by Billy Morton (no relation to Clyde).

The legend of this Alberta, Alabama kennel runs through the initial owner A. G. C. Sage, on to the present Jimmy Hinton of Tuscaloosa, who together had the two Mortons train for them plus the initial helmsman J. L. Holloway. 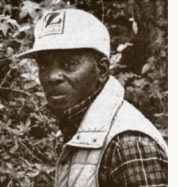 Now all this is stunningly impressive and more than a little complicated to recount. Yet my emphasis here is not on the above named men, nor the dogs. No. There is a silent, inconspicuous thread that runs through the fabric of these data, and these laurels. A part of Sedgefields as sure as the winding lane to the manor house, the great white-painted barn and the continual call of bobwhite on the hills and in the hollows is a slightly stooped, fluidly moving, soft-spoken, hands-in-pockets, 73-year-old Negro man named Ben (Man) Rand, Jr., who has put his touch of magic, his life and his sagacity on all but two of the National champions cited above and has not only hand-reared and partly trained all other dogs on the Honor Roll, but scouted each of them to their championships as well.

In all of American gun dog history I can recall no man who has figured into the making of so many champions  as has Man Rand. He is, then, in my opinion, one of the most notable gun dog men America has ever produced.

I wait for Man in the barn on a sawhorse with a saddle blanket for padding. When Man joins me he brings a red nylon tape check cord snapped to his star pupil, Alluring, who has just  won the National Free-For-All Championship and ran in the Nationals. Her trainer, Billy Morton, probably Man’s greatest fan and along with Jimmy Hinton, his most devoted friend, enters the barn and finds a perch. Jimmy Hinton joins us to lean on the stairs to the loft. We all start talking in the hallway of the great barn.

Man rode scout when Mr. Clyde won nine of his eleven National Championships. For Billy Morton, Man has scouted two more National champs. But before Clyde Morton died, he told Man, “I’ll always be two Nationals ahead of you.” Now the two are tied. Man wanted one more win—TO WIN! He must win, he says, he must win…and his voice trails off, as he looks off to the distance and takes a shallow breath.

Ben Rand Jr., was born on Sedgefield Plantation in 1917. His father worked there; he was one of the men who, shovel by shovel, built the hill on which the manor house sits. When Man was about eight, he was told to sit at a gate with a switch and let the wagon horses in but “whoop,” as he says it, the bird dogs or field trial horses from getting out. Man sat there for years as the plantation was built.

Louis Holloway, Mr. Sage’s first dog trainer, took a liking to the slight lad (Man says he’s 5’7” and weighs 145 pounds) and used to ride up to the clapboard and galvanized roof plantation schoolhouse and hiss for the boy to slip out. As Holloway would distract the teacher in talk, Man would slink to the offside of the horse and climb up under Holloway’s hunting coat, then the trainer would say out loud, ‘Well I got to be goin’ down yonder…”

Later with the bird dogs down and running, young Man Rand would put his bare feet in Mr. Holloway’s coat pockets and cling to the man’s neck as they soared over the grounds. Then when a dog struck point, Holloway would leap to earth to work the dog at wing and shot while Man walked the horse forward.

Later Man was given puppies to walk, to introduce to man and land and bird. Later still, he was training from womb to tomb. The dogs won like no other kennel of dogs ever won. And the owners and trainers would pose for the photographers with Man and dog and be handed their silver trophies and step to the limelight while Man and dog melted into the background to sit on the horse-drawn wagon, or later, inside the cab of a pickup truck. And as the record of wins grew, the owners and trainers and dogs were all voted into the Field Trial Hall of Fame. And the silent, out-of-sight Negro scout with the magic voice  and hands that did to bird dogs what master sculptors do to clay would begin that next Monday morning with his feed pans and his cooing voice and his soft hands to groom, and form, and love the dogs to more wins, still.

I don’t know for sure, but I think as common reason would have anyone think, that Man has stood and waited for some part of sixty years for a writer to show up, and put the ink on him, to tell you, the reader, of the endless days of whispering to dogs the ambitions he bore, the frustrations he endured, the never-ending hope that one day he, too, could receive and hang (that which he as much as any man who has ever lived has earned) a Field Trial Hall of Fame scroll on his scanty cabin wall.

If gun dogdom won’t vote him in, his dogs would. Dogs who knew the scout’s voice and touch before they ever saw daylight, who sat with him in the barn with the buck, who walked the fields on ropes, who later cast to hell and gone with the frail Negro man riding a tornado of a horse so no dog ever evaded him. 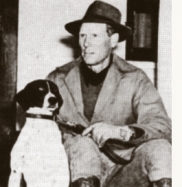 Billy Morton sums it all up for me in one statement. He says, “Mr. Clyde didn’t like Ariel because he wouldn’t do anything in training. He would only perk up at a field trial with the horses around and all the excitement. Yet, this is the only dog that ever won the National Championship three times and Man Rand trained him.

There are Hall-of-Famers who did less.

Or as Hinton, the boss, says, “Man just learned to think like a dog…he can ride up over the top of a hill and nine times out of ten look it over and say if I was a dog I’d go this way. He’s always right.”

More than a hundred years have passed since the first field trial was run in America. Since that time the stalwarts of the game have elected professional trainers, their patrons, gun dog writers, noted gun dog breeders, landed gentry, seasoned amateurs, and other devotees to the Field Trial Hall of Fame. 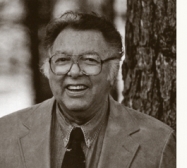 As an elector to that august body, not only does Man Rand get my vote but I call upon my fellow electors to cast their ballots for this humble scout as well.

I know for Man this is a backdoor hope, something not granted—not even considered—for his likes before. But the America of my pride has always awarded merit. May pride shine now.

Man Rand was elected into the Field Trial Hall of Fame the following year, 1991. He scouted 13 National Champions, 19 National Free-For-All Champions, 10 American Field Quail Futurity winners and 11 National Derby Champions. These statistics do not take into account the many other placements Clyde Morton won on the Canadian prairies handling dogs for A.G.C. Sage. 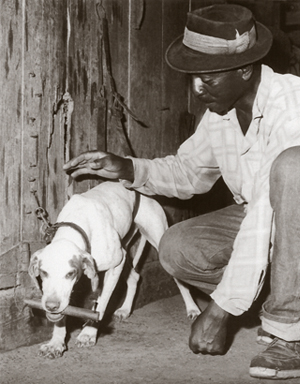 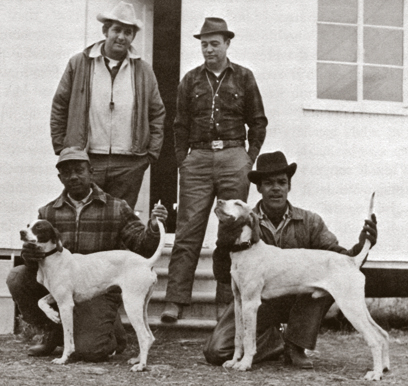 Having seen so many great dogs and having been associated with so many important champions, which five did Man like best? Ariel was his number one, followed by Luminary, Palamonium, Wrapup and Allure. 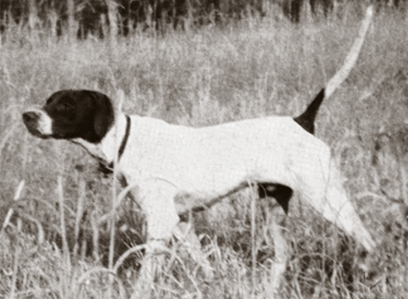 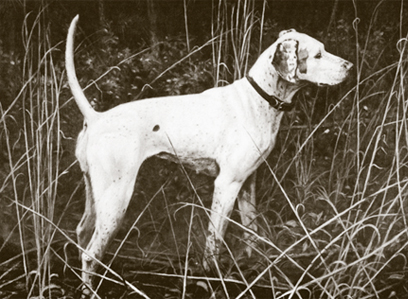 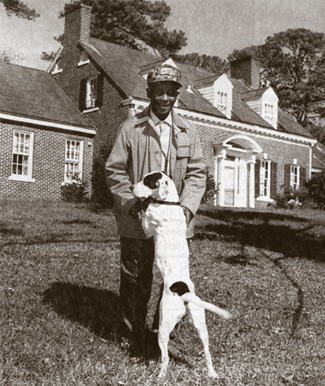 Man in front of the Sedgefield’s manor house with Champion Alluring.

Reprinted with permission from The American Field.