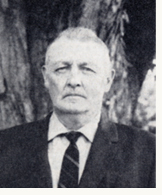 …Seldom does man achieve phenomenal success in the profession to which he has devoted more than half a century and still retain the candor, simplicity, and unpretentious modesty inherited from his forbears yet such a man was Luther Smith, dean of bird dog trainers—quail dogs, prairie chicken dogs, pheasant dogs, grouse dogs. He won championships from the sedge fields of Georgia and the Carolinas to the vast prairies of Saskatchewan, from the grouse coverts of New England and Pennsylvania through the pheasant areas of Buffalo and Baldwinsville to the pine woods of Michigan—truly an achievement seldom if ever accomplished by one man.

Born in Ripley, Miss., 78 years ago, Luther acquired his first bird dog at the age of twelve and thereby was generated by a love which activated the brilliant contributions which he made to the world of bird dogs and field trials. Perhaps his greatest achievement was acquired with the pointer Schoolfield, with which he won the All-America Prairie Chicken Championship, the All-America Quail Championship, and the National Pheasant Championship.

When World War II came along Luther interrupted his successful professional career to enter the K-9 Corps but his concepts of dog training were somewhat at variance with those of the military and he was subsequently transferred to the Burma Theater where, as the oldest doughboy in his outfit, he fought the jungles for seventeen months under the command of General Stilwell. Following an unexpected contact with some shrapnel and a precipitous dive into a foxhole, he spent several months in a hospital. When mustered out, Luther was told never to ride a horse again—truly unacceptable advice for a major circuit handler. However, fortunately for the grouse trial fraternity, he was discharged in Michigan and was persuaded by several men in that area to remain there and train grouse dogs, and what a career this handler of quail, pheasant and prairie chicken dogs carved for himself in the grouse woods! Winner of the Grand National Grouse Championship five times, the Grouse Futurity seven times with a total of 26-27 dogs placed in this stake, the Pennsylvania Grouse Championship and the Lake States Grouse Championship several times, the Grand National Puppy Classic and the Venango Grouse Puppy Classic more often that one can remember—truly a phenomenal record for a former big circuit handler. 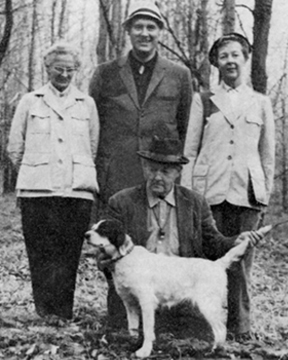 Luther was never loquacious, never known to speak ill of any individual or his dogs. No one ever knew exactly what he said to his own pointers and setters but he could “talk” them around a tight course in the grouse woods and come out with a National Champion which he did many times.

…Enshrined forever in the Hall of Fame (1970), his contributions to the sport of field trials will live for future generations to admire and revere. Luther Smith, “a better man,” has passed to his just reward. Peace be with him.