By long tradition, Ben opened his bream fishing season with Billy Lee, his friend since boyhood. Billy was Ben’s age, but like Ben he still worked, in Billy’s case as a utility hand on Mossy Swamp Plantation. Over the years he had worked as a field trial scout, hunt guide, assistant dog trainer, kennel manager, horse and mule groom and mule skinner, gardener (vegetable and flower), chauffeur, bartender and grandchild watcher-manners teacher, and myriad other tasks endemic to a quail plantation in Southwest Georgia.

With a fly rod Billy had superb grace and accuracy, seemingly effortless. Ben knew Billy’s father had taught him the craft. On this March 1 afternoon, the first for bream fishing of the spring, Ben asked, “Billy, how did your father come to be a fly fisherman?”

Billy smiled in his inimitable fashion, the smile of a man with cherished memories, and said,

“Daddy had share cropped on this land, working with his daddy. Then it was bought by Mr. Evans of Cleveland and changed from cotton land to a sporting place. Mr. Evans told granddaddy he could keep working the same acres on shares, or work for wages for him. Either way he would have the same cabin and garden, a cow and two shoats to butcher at Christmas. Granddaddy liked the sound of steady wages–what Mr. Evans offered was fair. So he and daddy became hired hands and my grandmother became a cook in the Big House.

“Daddy was good with dogs and horses, and before long he was breaking bird dogs and retrievers and mules and horses and guiding quail hunts. Mr. Evans was a fly fisherman and got daddy to paddle his boat on this pond. Daddy had never seen a fly rod, but he watched Mr. Evans and borrowing a rod from the boat house when no one was around he taught himself how to use it. He liked it, and before long he could place a fly or a poppin’ bug as exact as Mr. Evans. 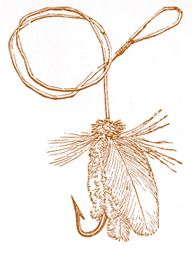 “Mr. Evans had four grown children, three boys and a girl, and they had several children each. One Christmas all the families came to the plantation for the holidays. It turned off real warm,  and keeping the grandchildren occupied and out of trouble was the challenge of all the hired help. Daddy came up with the idea of teaching those big enough to cast with a fly rod. Mr. Evans didn’t know Daddy knew how to fly fish, much less how to teach it, but Daddy was a natural teacher and liked children and they liked him. That started a tradition of a Christmas week contest among the grandchildren for distance and accuracy, conducted and judged by Daddy. This pleased Mr. Evans greatly and no doubt helped on the size of Daddy’s Christmas bonus.”

Ben reflected on all the changes he and Billy had witnessed in their long lives, and then on his last big trial, defending Billy on a charge of murdering his employer that had ended happily with a jury acquittal.

“Billy, every year when March 1 rolls around I say a little thank you prayer to the Man Upstairs for letting me live to see another spring.”

“Me, too, Mr. Ben,” Billy said just as he dropped his popping bug between cypress knees and heard the gulp of a monster bream breaking the surface to swallow it.

Tom Word sent this story to a friend who responded with this photo. Some of you may recognize him!

Thanks to Tom for the wonderful stories he sends to us to share with our readers!