Like all field-trial followers, Ben Reach knew personally most all the pros in the sport. The world of bird-dog competition was peopled by a small fraternity, widely scattered but in touch with one another through the American Field, a weekly magazine that had chronicled the sport since 1874, plus the internet.

Each spring Albany became the epicenter of the sport the first two weeks of March as four major trials, two all-age, two shooting dog, ran here back to back—the Masters and Southeastern Championships. They drew all the sport’s top pros and many dog owners for competition on wild birds over legendary plantations.

Albany was a year-around hotbed of field-trial interest, as well as the northern anchor of the quail plantation belt between Albany and Tallahassee. Along a narrow band between these cities lay ninety-odd shooting estates, most owned by descendants of robber barons or by latter day tycoons. A quail plantation was a trophy property, managed under traditions more than a century old, where blacks, crackers, and Yankee WASPS became mutually dependent in practicing time honored rituals with broke pointers, walking horses, mule-drawn shooting wagons, Lab and Cocker retrievers and London best double guns, 20, 28, or .410 gauge.

The most oft-repeated crisis confronted by Ben Reach in his long years of law practice was that of the wayward son, the teen-age lad gone wrong on account of his hormones and the rebellion built into the nature of a boy in adolescence. Countless parents had come to Ben and his pal Sam Nixon, M.D., over the years pulling their hair out and asking, “What can we do to save Johnny from himself?”

Often the advice of Ben and Sam had been, send your son north for the summer as a training helper to a bird dog pro, field trial or shooting plantation variety. The hard work and isolation of a summer in North or South Dakota, Montana, or a Canadian prairie province—Manitoba, Saskatchewan, or Alberta—had turned around many a youngster. Hard work had a way of instilling self-worth when a rough-hewn mentor, not a father, demanded accomplishment from a teen-age boy. Not all prairie summers reformed wayward boys, but enough did to keep Ben and Sam prescribing the solution. 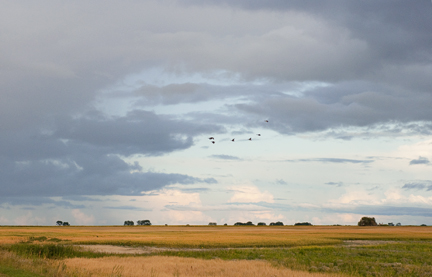 One of the pro handlers who’d been an effective mentor more than once at Ben and Sam’s request was Red Babb, an all-age field trial handler based near Leesburg who now approached the daunting age of sixty.

Through the years the economics of handling had grown more and more tenuous. Trucks were more and more expensive, diesel prices climbed steadily, as did the price of dog and horse feed and hay. Patrons resisted increased fee, and entry fees went up, but purses stayed nominal. The economics of being a pro handler had never made sense, and today they seemed impossible.

Over the years the pros had reduced expenses by scouting for one another rather than using an employee-scout. Each season two handlers would make a pact to travel to the same trials and enter their dogs under both their names so they would not be drawn as bracemates. This saved on horse expenses, as well as eliminating one from the payroll of each handler. But it created moral hazard, for when a handler had put in the judges’ books a strong performance, it was hard to go all out in scouting a partner’s dog that might knock your own dog off the judges’ short list. Many were the dramas this dilemma created, and thus handling-scouting partnerships were often short lived.

Training gun dogs and plantation wagon dogs in summers on northern prairies had long been a side source of income for pro handlers, but the Great Recession now cut deeply into it. More and more hunters passed on replacing their aging hunting companions and gave up the sport. The decline of wild quail and grouse across their natural ranges pushed the trend.

Times were bleak for pro handlers generally. For one handler they were worse than bleak. Red Babb had reached the end of the line. Sam Nixon told Ben Reach the sad story during breakfast at Millie’s.

“Red has hung it up. He hadn’t had a placement all season; his string was down to five dogs for two owners, not enough to cover the nut.  The root cause was, Red’s vision is failing. Glaucoma. You cannot handle a field-trial dog you cannot see.”

“He doesn’t know. He’s sent his dogs on to other handlers, sold his horses, advertised his trailer for sale, $12,000 OBO—or best offer. That offer is likely to be mighty low; there’s just no demand for an old heavy trailer like Red’s.”

Pro handlers who gave up handling for the public often took shooting plantation jobs, but these were now scarce, again thanks to the Great Recession. And Red’s vision problem would likely be an impediment.

Red had booked a time with Joanne to see Ben. He was due to come in at two p.m. today. On his walk to the office from Millie’s, Ben reflected on how he might help Red find work. When a new Ford pickup passed him and he read the dealer’s name on its license tag frame, an idea came to him.

“Mr. Ben, if you hear of any work I might do, I’d appreciate if you’d let me know,” Red opened with typical directness, true to his military background.  Ben said he surely would, then turned the conversation to reminiscence. They talked of performances of dogs in Red’s string, handled by Red and judged or just watched from the gallery by Ben. Like most bird-dog folk, they could recall a good performance in photographic detail over decades.

Then Ben turned the conversation to summer helpers Red had taken north at Ben and Sam’s request. Some had disappeared from both men’s view, a few were past boyhood and living productive lives as adults. Ben had one in particular in mind and saved him for last to mention.

“How about the summer you took on Emery Field?” Ben said.

Red Babb broke into a grin.

“Man, was he a wild one when I picked him up at the jail. Hair on his shoulders, scowl on his face under an attempt at a fuzzy beard.  Didn’t say a word ‘til we crossed the Mississippi, then he asked me to stop so he could pee. I just stayed as silent as he was. I gave him assignments by talking to Willie—you remember Willie, the black helper who was with me for years—like Emery wasn’t there. I’d say, ‘Willie, if you see Emery tell him to road them two derbies an hour.’ Emery would be standing right there.

“By the time for Emery to fly home to start school, he was a top hand with a dog and a horse, maybe the best summer help I ever had.”

Emery Field was forty now, very successful as a Ford dealer with stores in Albany, Thomasville, and Tallahassee. He’d also become a successful amateur field trialer, breeding, breaking, and handling his own dogs. Emery’s father had, twenty-three years before, come to Sam and Ben in desperation, seeking to turn Emery around. He’d been busted in a marijuana raid at a joint outside Albany. Ben had negotiated a delayed prosecution agreement on condition Emery work for Red for the summer. That summer of hard work had turned Emery around, and he’d gone on to attend the University of Georgia where he starred on the baseball team.

Ben didn’t tell Red, but Emery Field was the first person he intended to talk to about Red’s predicament. Next day at lunchtime, Ben drove his pickup to Field Ford. Inside he asked the receptionist for Emery. Emery emerged from his private office at the back of the showroom, the only one without a glass door and glass walls.

“Hello, Ben Reach, nice to see you. What can I do for you,” Emery Field said with a grin that explained much of what made him successful, the other half being a good head for numbers.

“Hello, Emery. Could we talk a minute in private,” Ben answered.

In Emery’s office the walls were filled with photos of field-trial winners posed by a scout with Emery standing behind.  In one Ben also appeared—he’d judged the trial.  So too did Red Babb, the other judge. The venue was Chickasaw Plantation, home of the Southeastern Championships and in the picture the venue of a Region 16 Amateur Championship.

Ben pointed to Red in the photo and said,

“Guess you know Red’s retired from the circuit.”

“I just heard that,” Emery said.

“He needs a job. That’s why I’m here.  Remember the summer you worked for him in North Dakota.” Ben wasted no time making the ask for a job for Red  and reminding Emery he owed Red big time.

The look on Emery’s face signaled to Ben he’d not be successful.

“Let me see what I might do, Ben. I’ve just laid off ten people; some had been with me for years. It’s going to be tough for me to offer Red a job, especially since he’s got no experience in the business,” Emery said.

“I understand,” Ben said. “See what you can do. And thank you. Who should I talk to about maybe trading my truck for a two or three-year-old one?”

Emery sent him to his used vehicle manager, whom he called with Ben listening to be sure he was in. Then he promised to call Ben tomorrow about Red’s employment. Ben looked at the used truck inventory, shook his head at the prices,  and drove back to his office.

“I’m sorry, Ben. I’d really like to offer Red a job, but I just cannot figure a way to do it without destroying my team’s morale.”

“Thanks. Let me know if something opens up,” Ben said.

Next morning at Millie’s Diner  with Sam, Ben opened the Albany paper and read a headline.

The story was a currently familiar one, mufflers sawed off cars for their catalytic converters’ precious metals.

On his walk to the office, Ben called Emery Field on his cell phone.

“Don’t you need a night watchman?”

Ben figured that job would be ideal for Red since it would leave him daylight hours to train Labs, a sideline he’d always been good at.

So Emery Field hired Red Babb as night watchman at Field Ford—a low-paying job but a job with health insurance coverage.  Six months later, Ben got a call from Red.

“Mr. Ben, just wanted you to know I’ve landed a better job, thanks to another former summer helper.  I’m going up to Virginia to train Lab war dogs for an outfit that trains them for the military, run by Bobby Bass—you remember you sent him to me to take north one summer when he got busted for a DUI at about age eighteen.

Ben had read about the Labs being used in Iraq and Afghanistan for IED detection.

“That’s great, Red.  I wish you luck. You’re not selling your place here are you?”

Red owned ten acres on the edge of Leesburg where he’d long had a mobile home, kennels, a stable, and horse pasture.

“Don’t use that word around me,” Ben said. He and Sam had vowed not to voluntarily retire, but to tell one another when either saw the other was slipping.