Ben had again agreed to be a field trial judge as a substitute for a last minute withdrawer. He hated to judge, but he always ended up enjoying the last minute assignments. But this time proved different.

When Ben arrived at 7:30 opening morning the fellow judge announced was not present. Instead was a man Ben had vowed never to judge with again. He faced a Hobson’s Choice, to withdraw and embarrass the club and infuriate the contestants, or to compromise his principles. Reluctantly he decided to do the latter. He was furious.

The man he had vowed not to judge with again was a crook. Ben knew this because a client had told him the facts under protection of attorney-client privilege.  Thus Ben could not tell another of the proposed fellow judge’s transgression without violating his own obligation to keep a client confidence, and Ben was not about to commit that violation. So, he would judge with a crook, and he could not reveal this to anyone.

The crooks’ transgression was this. He had once (and only once) judged the National Championship. He’d taken a bribe to reveal the winner the night before the announcement to another crook, Ben’s client who had told Ben of the offense under protection of privilege.
The reason for the transgression was to assure a winning bet to the briber. It was the only case of its kind involving bird dog field trials Ben had ever heard of.

Ben searched his mind for a way to protect against the dishonesty of his fellow judge. Technology provided his answer. Ben asked the chief marshal to talk with him privately over a cup of coffee. They walked into the clubhouse where a black woman Ben had known since childhood, Mattie Jones, whose day job was cook in the Big House of the host plantation, was beginning lunch preparation. After exchanging hugs with Mattie, Ben poured the marshal and himself mugs of coffee.

“You have your cell phone on you?” Ben asked.

“Yes,sir,” said the lad, who served as dog trainer for the host plantation.

“Does it take pictures?” Ben asked.

“Yes, sir,” replied the lad, and showed Ben a picture of his three-year-old twin sons.

“I want you to ride close to judge James every minute of this trial and take a picture of every piece of bird work he covers, send the pictures to my phone as soon as you take them.” Ben gave the lad his cell number, and he programmed it into his phone.

Ben did not have to tell the lad the reason for his request. The lad knew instantly Ben had no confidence in his fellow judge, though not precisely why. The trial world was filled with rumors, including rumors about the other judge. Ben offered no reasons for his request. The pictures would afford Ben real time conformation or rebuttal of what his fellow judge told him about what he saw of a key part of the action out of Ben’s presence. More important, the knowledge that the action was being photographed and the pictures transmitted to Ben should serve to make the judge cautious if not honest–Ben told the marshal to tell the fellow judge what Ben had asked him to do.

At the lunch break while Ben and the other judge were sharing bowls of Mattie’s stew, the judge asked, “Why did you ask the marshal to take pictures of the finds I am covering alone?”

Ben stared in his eyes and said, “Alf Goins was my client.” Goins was the man who had told Ben of the judge’s betrayal at the National Championship.

Ben and his fellow judge did not speak to one another again during the trial, except to tell one another if they thought a performance had moved the placement of a dog they were carrying for first, second or third. After the placements were announced at the end of the trial, Ben told the club president,”Enjoyed judging your trial Sam, but please don’t ask me again. I am hanging up my judging spurs.” 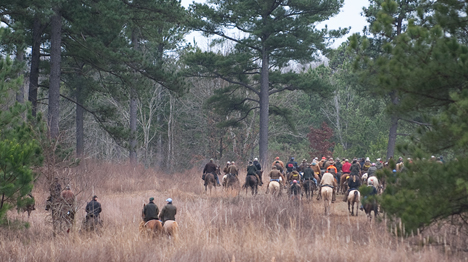