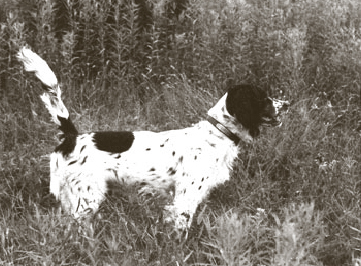 Reading through some issues of the American Field from 1959 (see pdfs located at the end of this article), it is clear that the original foundation of the trial system was a strong contingent of grass roots events of mainly half hour heats. Competitors, both novice and veteran, could compete weekly, building their skills and readying their dogs for the grand goal at the major stake events (the hour stakes, classics, and championships). Paying particular attention to trials in the Mid-Atlantic and the areas that now hold grouse trials such as New England, it is of particular notice that 50 years ago in every corner of the state of Pennsylvania, numerous small towns hosted weekend trials such as that at Bradford. Most of these small clubs no longer exist. The Bradford trial report states the club had been running trials for over three decades presumably starting in the 1920s. This club and likewise, for comparison in Maine, the Westbrook club and trial no longer exist.

Note the community efforts evidenced in these two events that the trials commandeered. At Bradford the community fire company hosted lunches/dinners and the local banker was the publicity director and provided a report of the trial to the local newspaper. The Westbrook event held a social dinner event with dancing. Things have changed in so many ways.

The two trials noted here were horseback stakes run on planted or pre-release birds with a bird field. Pheasants are mentioned, utilized for the Westbrook trials. What’s most noteworthy about these trials, however, is that the participants were the same who patronized the grouse trials of the time and who would soon become synonymous with grouse trials in New England. (Note: There were no American Field recognized grouse championships in New England in 1959. The New England Championship was run with the possibility of pointing quail, pheasant, grouse or woodcock. It later split to form the New England Open Shooting Dog Championship (horseback) and the New England Grouse Championship.) The Bradford trial participants included Robert Habgood, Richard Shear, Dr. Jim Flannigan, and Carl Beattie. In Westbrook, participants included notables: Eddie Frisella, Phil Fogg, and Mike Seminatore and others who would be the original stalwarts from the grouse trials of New England. It is interesting, that at the time, people participated in both ‘grouse’ trials and ‘horseback’ trials with the same dogs (Grouse Ridge Smokey, for example) and expected them to be competitive in either. Also note that they ran ‘all-age’ and ‘shooting dog’ as part of the full slate of events and often entered the stakes with the same dogs.

As a side historical note, according to the American Field; in the beginning “all major stake field trials were run as ‘all-age’ stakes. That term meaning for the “finished, high class bird dog”. It was not until “after WW II that the shooting dog stake was introduced, and in the early 1950s was recognized and hence we had two distinct designations — ‘all-age’ and ‘shooting dog’.” At no time was the designation of all-age, whether on the major circuit or in the original grouse trials across the country such as Marienville, PA, intended to designate stakes open to ‘all ages’ of pointing dog contenders. All-age was and continued to mean competitions for the ‘finished, high class bird dog’. The designation ‘shooting dog’, was originally put forth and intended to highlight stakes representative of the gentleman’s shooting dog versus the wide ranging, high class field trial bird dog at the time that stretched the country as far as it would allow. The same translated to the grouse woods, a gentleman’s foot shooting or gun dog versus the high class field trial bird (grouse) dog. Those conducting the early grouse trials chose to keep the all-age designation to emphasize the promotion of the high class field trial bird (grouse) dog and this designation resulted in the Grand National Grouse Championship at one time counting as a qualifying stake for the National Field Trial Championship at the Ames Plantation in Tennessee. The PA stakes today are still classified as all-age.

Obviously by the time of these two events in Bradford and Westbrook, a differentiation had been made in many or most American Field trials as to performance standards of horseback shooting dog or all-age. Note in the Westbrook report the statement about the grounds having “running room for real all-age contenders and some interesting wooded country over which to test the merits of northeastern shooting dogs.” Though there was a differentiation made between an all-age and a shooting dog stake by 1959, competitors in the Middle Atlantic and North East ran the same animals sometimes in all three stakes — grouse woods, horseback shooting dog and all-age (again note Grouse Ridge Smokey).