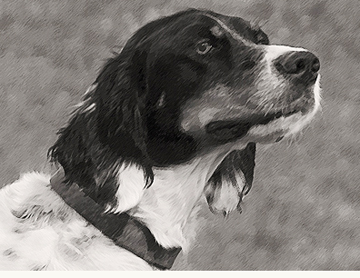 One claim I lay to uniqueness in this Life is the way my first sight of a bird dog pointing affected me.

That shock…that frisson of awe…was only matched by one other revelation in my ongoing young life — an open-lipped kiss from my favorite cousin and tennis partner in another autumn.

Here is the scene.

I was eight, just two years in Georgia from a New Jersey apartment building, still stunned and numbed by my parents’ divorce, and I had gravitated to “male-bonding” with my paternal Uncle Pat.

Pat came by the “Big House” to see my grandfather often, and demonstrated his prowess at calling up a Bob White quail during the summer.

This magic was developed in thick shrubbery along the frail wood fence of a five acre fallow pasture. To a youngster from suburban Jersey, the sharp “Bob-White” of a bird in answer to the tremolo invitation of one high note from Pat’s lips gracefully slipping and rising in scale…well it was a hypnotic new experience. And when the Bob White cry came closer and seemed at my feet in a sprawling red leafed bush, it was startling.

My avian familiarity was with sparrows and starlings in East Orange, and Mrs. Goldstein’s nasty old parrot.

So now snoozy summer was gone and Pat arrived with the most magnetic and huggable canine I had ever seen. She was an almost blue tricolor setter with orange mouth markings and two punkin seeds on her eyes. Somehow she put more bite in the fading November afternoon just being there.

“Let’s see if we can find old Bob and the covey he’s been tending for Jenny,” Pat said, repeating a tutorial  fact. 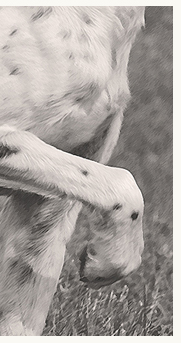 “Ol’ Kate’ll do it FOR us…watch…” And he released her over the fence, placed his little .410 on the opposite side and helped me over.

White oak, Spanish oak, tulip poplar and sumac rimmed the pasture’s far corner. There was a clump of heartbreakingly bright crimson-pink-to-orange sassafras scattered around. The setter ran far left, then far right, caught the fenceline and, head raised, began to slow, turned back toward the pasture and then, march…yes…

MARCH to an unseen barrier that defeated her, slammed her to halt in mid step.

She was poised with her off-forefoot bent. Frozen.

I lost my breathing. I believe if I had eaten that afternoon, I might have lost the meal. Racing through my brain here: “What’s the matter? Has she been struck into stone? What IS it?!

Pat had to nearly tackle me to keep me from grabbing and shaking Kate. He did and then bade me sit, and he walked up about nine quail in an exciting disorienting sound that I have never quite gotten “jaded” about.

She stayed while he shot a straggler, which was interesting, and which tasted good on buttered toast points that night…but the dead bird and its flavor faded.

I have been forever after, a Demi-Deity of sorts, reigning over my own paradise and it was all populated by gallant, beautiful dogs with magical gifts of location and locomotion and myriad colors and temperatures and storms and droughts that would never have anything to do with Death, for me.

Already, I was an addicted slave to William F. Brown’s Clarion Call, which I was to hear from his lips 20 years later: 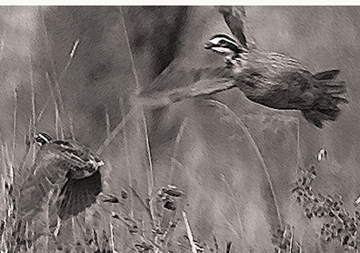 If you’re new to Strideaway and to Bill Allen’s wonderful words, check out his “The Unforgettables & Other True Fables” in the Strideaway Store!