Tribute from the Prairies 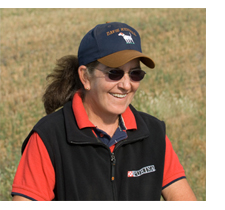 The earliest this scribe knows of dog trainers coming to the rural Manitoba Municipality of Albert was 1933….Clyde Martin, Bert Black and Ivan Yopp. This is not to say there weren’t others who came earlier. Mr. Yopp who trained for Kilsyth Kennels owned by G. M. Livingston from Quitman, Georgia summered right in Broomhill. He brought with him 27 dogs and his helper, Jack Gloster. So it started, the summer migration for young men, their wives and children, helpers, and their dogs. In 1936 Capt’n John S. Gates with his wife Miss Maxine made the trek to Broomhill. There was Mr. and Mrs. Paul Mottern, Harry Jones, Lee and Jo Worstell, Mr. and Mrs. E. A. (Red) Weddle, Mr. George Moreland, Mr. and Mrs. G. A. Story, Ed Higgins, Gordon Reese, Bob Lamb, Billy Taylor, and others in those early years. In years to follow, the Gates’ sons, John Rex and Robin would train here, Colvin Davis, Freddie Epp, Don and Terrell Dickson, and several more. Trainers spent their summers working dogs in other parts of Manitoba, Saskatchewan, and Alberta at earlier dates, but concentration of this writing mainly focuses on the Broomhill area.

In the early 30’s making a 2000-mile trip to a foreign country with one’s family, helpers and arranging transport for the bird dogs surely was daunting. The people and their belongings would travel by car or pickup truck but the dogs by rail. The local folks would travel to the border with wagons to bring the dogs to Broomhill and oftentimes the people as well.   If it was a wet summer, the roads would only allow horse drawn or tractor pulled wagons to travel about. Some trainers would board with local families; others would be shown abandoned houses that could be used for the summer. Electricity and running water were not available to most. Phones were scarce with some neighbors having one that they would generously let the summer residents use. In the early years horses were not brought from the south, rather they were borrowed from Canadians. The horses were used during that time by the northerners for winter chores so having them ridden in the summer months kept them in shape. Clydesdales and Morgans were the majority of what the locals had to loan along with a few Quarter horses. The riding was a little rough and some of the horses were not broke to ride but by summer’s end they had many miles across the prairies under a saddle. The trainers also used them for hauling their dog wagons that worked great as they were used mainly for pulling by the neighbors.

One must wonder why they went and why they still go to Canada to train their dogs. The obvious reasons are the cooler temperatures, the open country, plentiful game, long daylight hours, and uninterrupted working days. Yes, all these things make it perfect for the dog trainer but still the challenges of the trip, the long summer, and all the arrangements that have to be made at home before departing, leave one wondering. The trainers, of course, make their living working dogs and handling them in competition, the owners bear the majority of the costs, and the land to work on up here is through the generosity of the people who have become dear friends over the years.

It sounds as if maybe a dog trainer has it alright and in their eyes this is true but a closer look reveals something that is not often written about. The sheer love they have for the dogs, for the sport, for the competition is the driving force. They pickup and leave their homes for the summer, travel all fall, winter, and some during the spring to pursue this way of life. There are a lot easier ways of making a living that would not take them away from family and friends or miss ballgames and dance recitals. The talent of a contender, the records they have broken are often talked of, but if not for the unselfish love of it all by a dog trainer, where would such talent be shown? What would the history books of this sport be if not for this rare breed of person?

This 2017 running of the trials in Broomhill, Manitoba is dedicated not just to the trainers who have ridden across these Manitoba prairies but to all the trainers on the prairies who strive to keep this way of life alive! Sincere thanks to each of them for the giving. 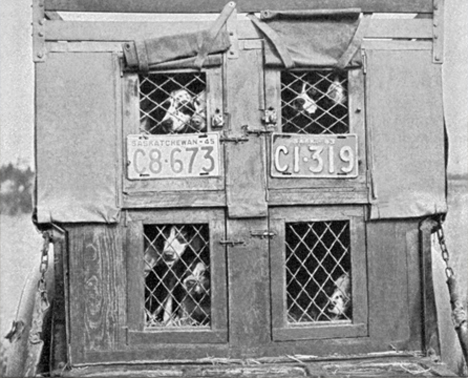 Dog boxes mounted on truck bed, circa 1945 or later. 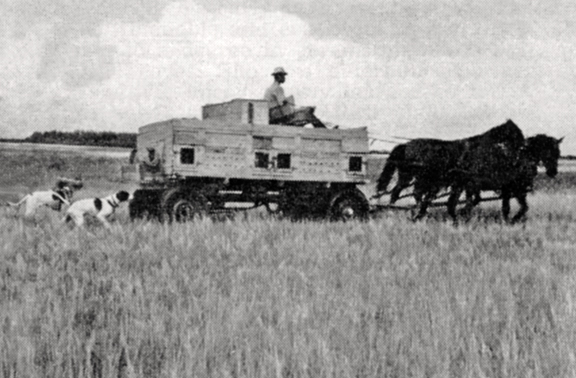 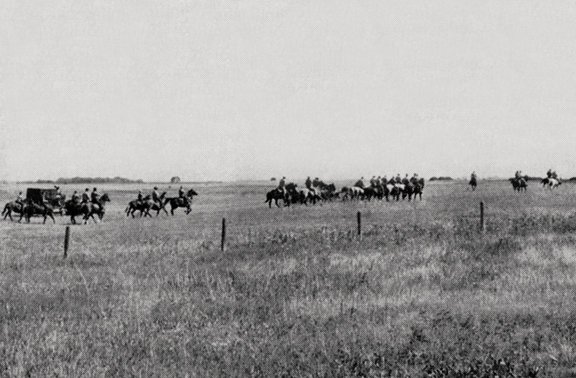 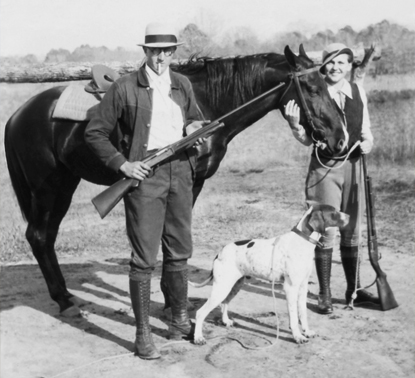 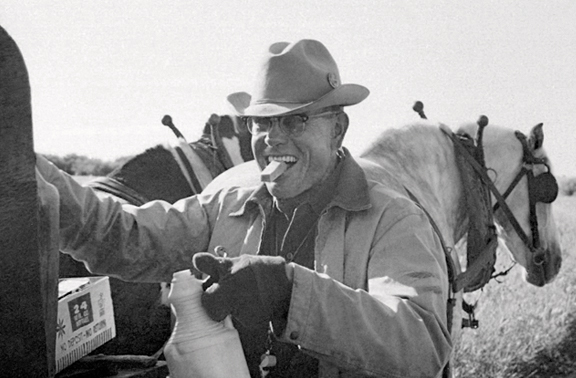 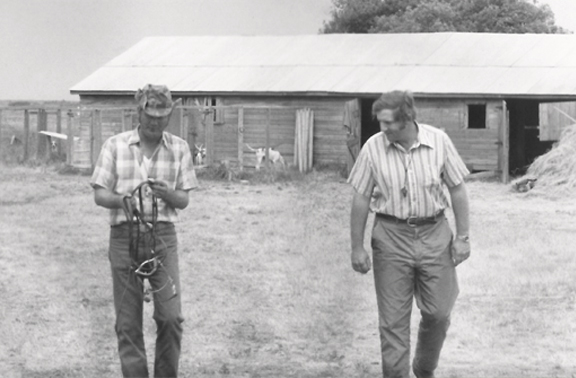 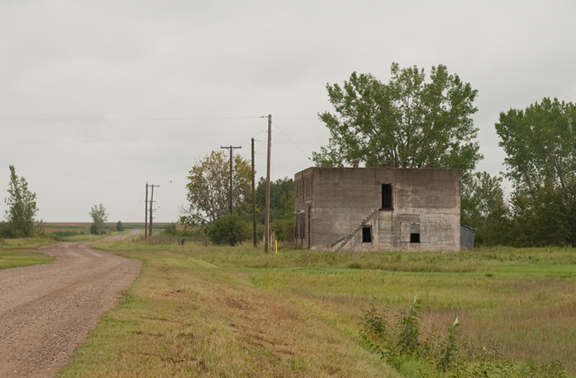 The Kilkenny General Store in Broomhill was built in 1908. In its heyday, the store was the center of the community. A hand-operated gasoline pump sat at the south end, in front of an entrance to the store and post office, with an implement agency and garage at the north end. Three suites on the upper floor were often rented to field trialers during the trial season. 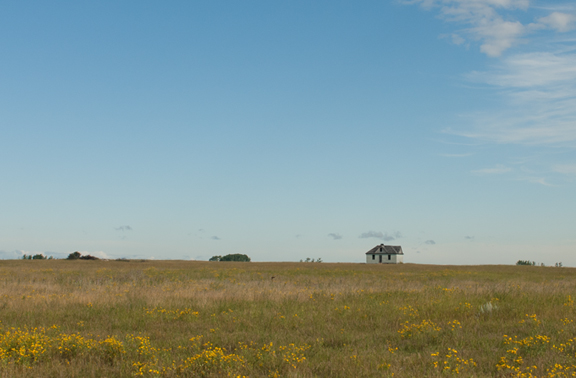 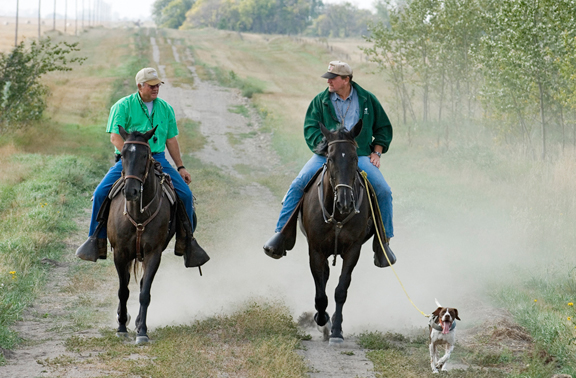 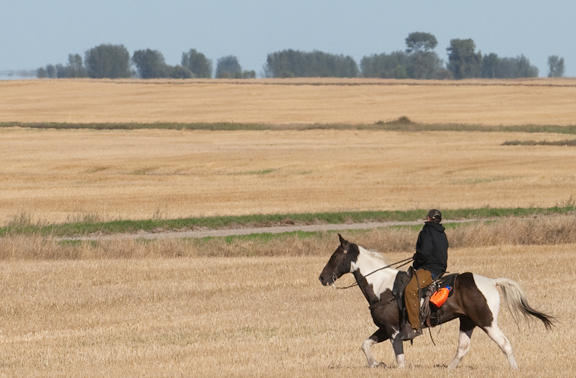 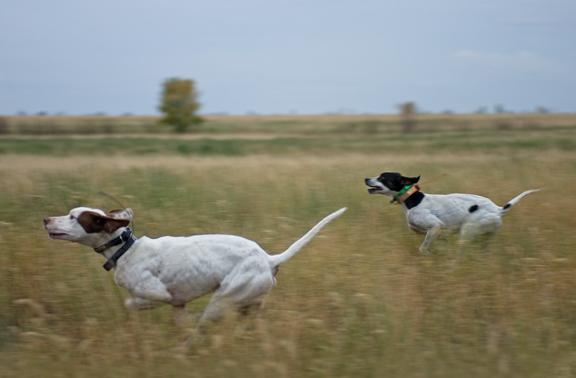 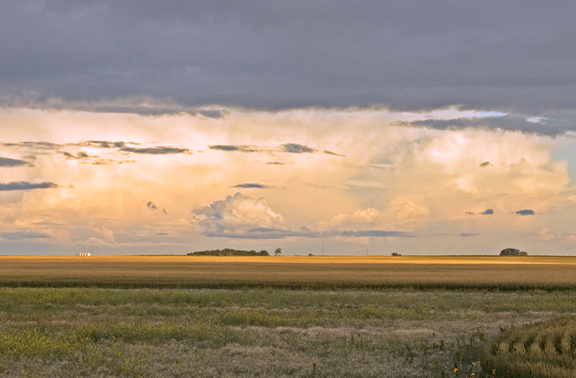