Wanted: An Encore for Quail 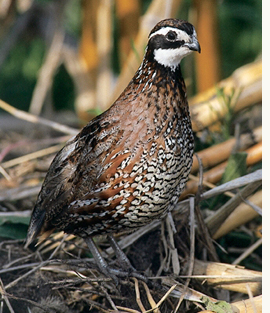 Our collective actions over a half-century—intensified farming, forestry, and urbanization—have gobbled up prime quail habitat. And while conversion to ag lands and covering habitat with houses are what we usually associate with wildlife loss—the same result has come through inaction. Lack of land disturbance can be as negative for quail as direct habitat loss. Without the benefits of prescribed fire or mechanical management to set back plant succession, quail cover quickly becomes overgrown and choked with plant litter, brushy habitat becomes forest, and productive grasslands lose their vigor.

This decades-long assault on habitat has had serious effects. From 1980 to 2000, bobwhites declined range-wide by an average of nearly 70%, and much more than that in some states. The Southeastern Association of Fish and Wildlife Agencies—whose members manage wildlife in 16 states—has even suggested the bird could disappear from some areas of the South by the end of this year. Quail, and quail hunting, are in dire straights indeed.

There are parallels here to the problems of pheasants just 28 years ago, when Pheasants Forever (PF) formed. Then, hunter/conservationists charted a new course to take action on behalf of upland wildlife, and Pheasants Forever was at the forefront of that grassroots movement. The idea was simple: Improve pheasant numbers at the chapter level by giving local folks the incentive to do habitat work in their own backyards (meaning that habitat funds were controlled locally, rather than being spirited away to headquarters). Then, with membership funds and donations, PF upped the ante by adding a strong legislative voice for wildlife in the federal Farm Bill that weighs so heavily on resident species.

The folks that started Pheasants Forever dreamed of doing good things for wildlife at home and influencing farm legislation affecting their local habitat at a landscape level—and the dream came true. Today, 28 years later, a network of 630 Pheasants Forever chapters and 120,000 members work in concert with agencies to benefit all wildlife—completing over 23,000 projects each year and adding to cumulative accomplishments that surpass 5 million acres. In the legislative arena, just one of the several Farm Bill programs that Pheasants Forever supports—the Conservation Reserve Program—produces 13.5 million pheasants annually. Those are the rewards of being proactive.

Can there be a similar outcome for quail? It won’t happen fast. Decades passed as bobwhite populations were whittled down, and it will take time and commitment to rebuild them. We think there are some good signs. The public has noticed, and they want quail back. There is even a national plan to restore quail—the Northern Bobwhite Conservation Initiative. It depends on state agencies becoming actively engaged in quail recovery on public and private lands, and that’s beginning to happen. But the agencies can’t do it alone.

Five years have passed since Pheasants Forever launched Quail Forever (QF) to assist quail, and the initial signs are positive. Over 115 Quail Forever chapters have sprouted in more than two dozen different states, and more than 7,000 quail enthusiasts have become Quail Forever members. Young chapters are already initiating habitat projects and youth programs. Among other things, they are promoting CRP’s CP-33 Practice (Bobwhite Buffers) to provide transitional habitat along row crops for quail nesting and brood rearing. We are also engaged with policymakers in the needs of quail. And, since the QF model is the same as PF’s, all of those locally generated funds remain under the control of each chapter to benefit quail. We know that model works.

Quail need troops. For this most local of game birds, the rubber will meet the road in local communities. Folks will need to be engaged there to raise funds, call Congressmen and women, prod agencies, and plant hedgerows. If you were interested enough to read this—that means you are needed.

In this business, we generally lead with our hands out, palms up, asking…for a donation, advocacy, some consideration for wildlife. Many of us hunt and otherwise enjoy wildlife, but it’s a razor thin slice of us that grab hold and give back. The volunteer gene is not the rarest in the human genome—it just needs to be activated. Over a couple decades in the business of helping upland wildlife, my greatest reward has been rubbing shoulders with scores of regular folks who decided—hesitant at first, and grateful later—that they could give back.

So, as you tune up the gun for the coming autumn (or ready your field trial dogs), please reflect for a moment about what you can do to help quail. It doesn’t matter who you are, just that you care and have the will to take action. Pick up a book on quail and learn, become a member of Quail Forever, volunteer with an agency, start a chapter, initiate the next grassroots habitat project to bring quail back. Don’t just watch as quail fade away. Do something.